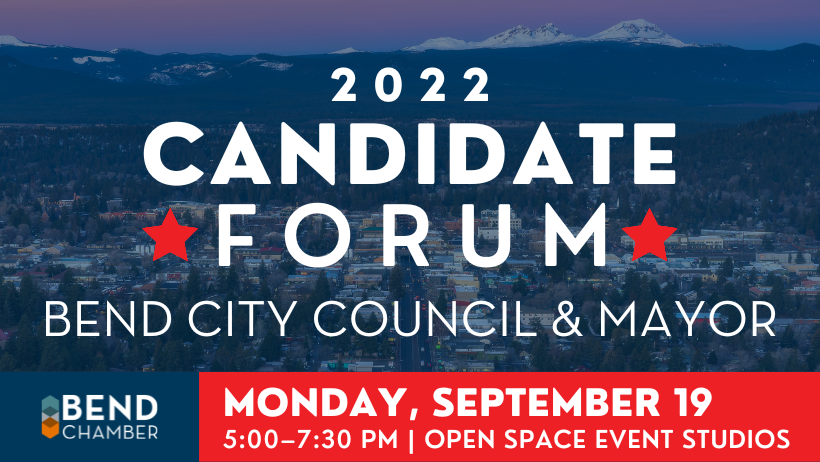 Election season is upon us with candidates running to represent Bendites at all levels of government — from City Council and County Commissioners to the State Legislature in Salem. The Bend Chamber of Commerce is excited to host a series of forums focusing on the business community to introduce the candidates and learn about their policy platforms. You’ll hear from the candidates firsthand, plus have the opportunity to participate in a Q&A session.

Before and after our speakers, we’ll have plenty of time for networking — plus bites and beverages. Beverages will be provided, including beer from Deschutes Brewery, cider from AVID Cider, plus appetizers from Bleu Bite Catering.
Join us on Monday, September 19, to hear from the candidates running for Bend City Council and Mayor.
Doors open at 5:00 p.m. Program starts at 5:30 p.m.

The Bend City Council has three City Council seats and the position of Mayor that will be placed on the ballot for the November 2022 election. The Bend City Council is comprised of six council members and an elected Mayor. Council Members are elected to four-year terms. One of the Council positions is for the remaining two years of a vacated seat.

When a mob stormed the US Capitol on January 6th, Allen Schauffler boarded a plane in Redmond and flew to Washington DC. For the past three years, he has stopped with reporting the news on Central Oregon Daily — he’s been going to the story, bringing you there and getting a firsthand look to find the truth. From the US Capitol riots to the violent protests in Portland, from the governor’s race in Oregon to fundraisers for the Humane Society for Central Oregon, Allen’s passion is simple and profound — uncovering the stories our community cares about and making sure they are told.

Now free and open to the public!